Online Craps is a game where players bet on the result of two rolled dice. It may be played by one or more players wagering against each other or the casino/bank. Online Craps works in a similar way, except, it is more often played by one player against the online casino bank. This game has woven its path through the nations, making its way into and winning the hearts of players too. The introduction of online craps has made the casino game even more popular. 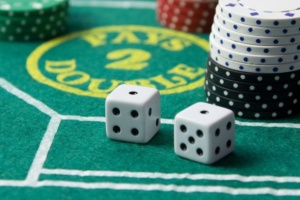 The History of Online Craps

Craps is believed to have emanated from an ancient game known as Hazard (meaning dice), a game from England and thought to have begun sometime in the 12th century. It gained much popularity in the 17th century and was played with two dice and had somewhat complex rules. Thus, Craps, first named Crapaud, was developed with much simpler rules while keeping the basic concept of the original game.

Crapaud is a French name meaning frog, seeing as the game was often played in the streets with the players crouched over like frogs around the dice. This ‘street craps’ spread the game of craps, even making its way to World War II. It gained much fame among the soldiers at the time.

Today, Gamblers gets to relish this game in more ways than one, having the opportunity to play it in the comfort of their homes. Thanks to the advances in technology, more specifically, the Internet which brought about online casino gaming in 1994. Players can now have the same thrilling experience through a digital interface, and play their favorite online craps game for Real Money.

Online Craps is very much like standard craps, adhering to the same gaming rules and principles. Here are some of those game rules: 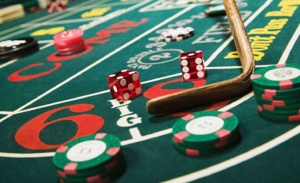 A player in craps must place either a Pass line bet or Don’t Pass bet when he wants to shoot his dice. The player may bet on both on the come-out roll if they so desire.

Quick and easy access – the very first significant advantage of online craps is that you do not need to leave your home, travel to possibly another town to play your beloved game. Online craps is one of the best table games available. It is readily available on your desktop, with a good Internet connection, you are ready to go.

Bonuses – online craps in an online casino is even more enjoyable since there are attractive bonuses in place.  Local casinos do not offer these.

Variety – you get to have fun with the many varieties of online craps than at a land-based casino.

Lower house advantage – unlike in traditional craps, it is possible to play in a way that increases your winning chance with online craps. 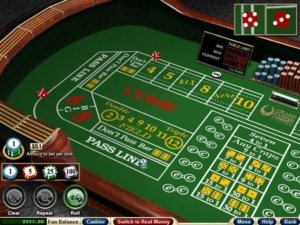 What is Online Craps?

Online crap is a digital version of the classic table game of craps. It is mostly like the original craps, except you play via the Internet, on a PC or remote device like a smartphone. You play by wagering on the outcomes of two rolled dice. You may bet for the shooter to win or to lose.

Where does the game of Craps come from?

Craps originates among the French and gained a lot of fame around the 17th and 18th centuries. It is from an old English game called Hazard, which they used to play with two dice. Craps, however, is a less complex version of hazard.

Where does the name ‘Craps’ come from?

After being easy from the original game of Hazard, the new game was titled Crapaud, meaning ‘frog.’ This was because this easy to play the game was popular in the streets, people play bent up on knees like frogs around the dice.

In Online Craps, am I playing the shooter or the other player?

With online craps, you play the shooter. You are the one who must throw the dice. Since you have the luxury of playing privately, this should keep the shyness that comes with shooting in public away.

In Online Craps, what are my winning chances?

Since Craps is a game of pure luck, the game offers the same winning potential as it does losing chances. The house edge is somewhat the same all around, about 0.67%, which is not bad at all.

If you are playing at a reputable and secure online casino, then you can safely say their online craps is also fair. Our online casinos have stood the test of trustworthiness and ticked off all our checkboxes. They also make use of Random Number Generators on their games. These build outcomes of games in an unpredictable manner, ensuring unbiased results. 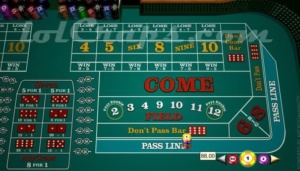 Ace/Deuce – a player’s bet that the shooter will roll 1 and 2, equalling a 3.

Action – a name used to refer to a busy craps table.

Any Seven – a bet that the shooter will roll a 7.

Ballerina Special – a roll with two’s on each dice.

Big Six – an even money bet that the roll will yield a total of 6 before a seven can take place.

Big Red – placing a bet on any seven.

Boxcars – a bet that the shooter will land two 6’s.

Big Eight – an even money bet that the roll will yield a total of 8 before a seven can take place.

Come Bet – a bet made after the come out roll. Similar to a pass line bet.

Come Out Roll – the very first roll of the dice in a craps betting round.

Charting a Table – Keeping the outcomes/results of the craps game on track.