Lightning Box, an online gaming creator, announced the release of a new online gaming slot. The slot game will be released momentarily. It is based on the classic Legend of the Sleepy Hollow. Lightning Horseman is a five reel, 40-payline slot game with a spooky theme. The game includes a 95.5% return to a player percentage. The game will be launched exclusively through Betsson on the 25th of July, then on August 8th, the game will be released to the general public. 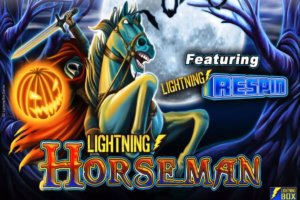 There are a number of things gamblers should look out for when they give the game a try. First, lightning bolts provide additional spins if six or more are on the reels. Fifteen lightning bolts trigger a Flippin’ Re-trigger special feature that offers re-flipped Lightning Bolts to provide extra cash for gamblers. The scatter symbol is the lightning bolt.

Symbols found in the slot game keep in line with the Sleepy Hollow theme with a red-caped lady, a raven, a man with a lantern, a treasure chest, and the infamous covered bridge. The base symbols comprise of the traditional card symbols of the Jack, Queen, King, and Ace. The wild symbol is the horseman who substitutes all symbols of the slot excluding the scatters.

When six or more features are found on the reels, the special lightning bolt bonus gets activated. With every extra symbol that appears in the additional spin round, the reels reset the spins back to three. Players are able to get a top deal of extra free spins.

Four jackpots are included in the slot game, the Minor, Mini, Grand, and Major. Take a spin and get lucky at Betsson this July. Luck might be on your site. Give the game a try today for some lucky win and fun gaming online.